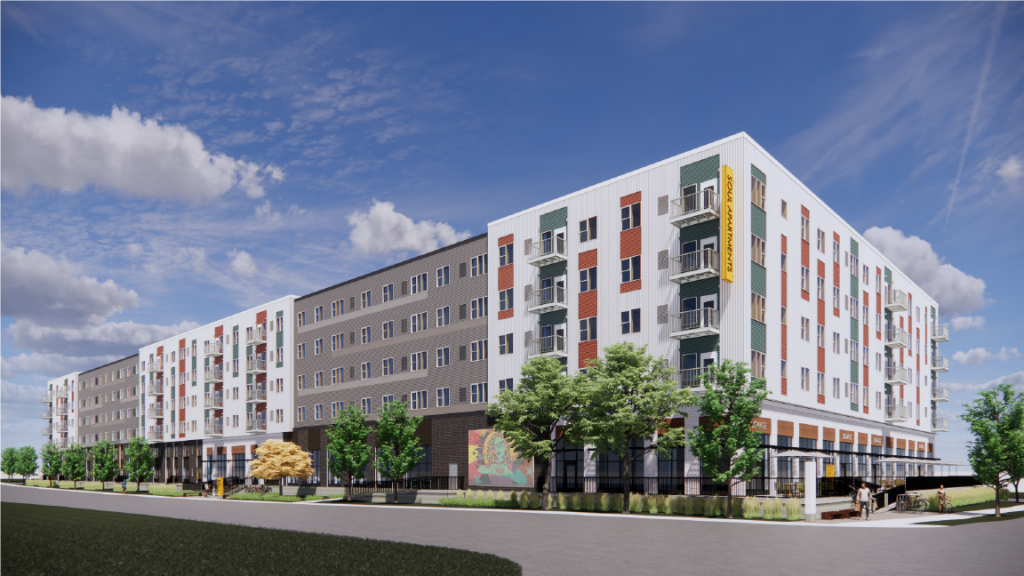 Schafer Richardson announced the acquisition and commencement of a $70 million redevelopment project that will provide new affordable housing and commercial space to the City of Saint Paul. The Minneapolis-based real estate company acquired the site from American Red Cross, who previously owned and utilized the site as a blood donation and education facility.

Located at the intersection of Robert Street and Plato Boulevard in the City’s West Side, the development, named Soul, will add much-needed deeply affordable housing for Saint Paul residents and families. The project will provide 178 one, two, three and four-bedroom apartment homes, attracting both individuals and families.  Twenty percent of the units will be set aside for households at or below 30% of the Area Median Income (AMI) with the remaining units eligible for households earning no more than 60% AMI. In addition to the apartment homes, the project also consists of surface and underground parking, indoor and outdoor amenity spaces, on-site management, and nearly 9,250-square feet of commercial space.

“This project is everything we could hope for in an affordable housing project, including units large enough for families,” said Ward 2 Councilmember Rebecca Noecker. “I just could not be more excited about the way this is going to revitalize this part of the West Side Flats and appreciate everything Schafer Richardson and city staff have done to work with the community to make this happen.”

The project will comply with the City of St Paul’s Sustainable Building Policy and intends to pursue Enterprise Green Communities and Energy Star certifications.  There will be energy and water saving measures in and around the building, as well as a photovoltaic (solar) array on the roof to offset electricity costs.

“Over the past year we have worked closely with external partners, specifically the West Side Community Organization, to ensure that Soul would meet important community needs and would also be viewed as a dynamic and valued addition to the built environment,” said Development Manager Dominik Jenson. “This project was faced with many hurdles, ranging from construction pricing and interest rate volatility to financing and deal structuring related items, in which were triumphantly reconciled each time they arose.”

Construction at the site will begin immediately and the project will open to residents in Q2 2024.

Schafer Richardson appreciates the partnerships of those who assisted and supported in the successful closing of Soul, as well as those who will continue to make the project a success during its construction and future operation.