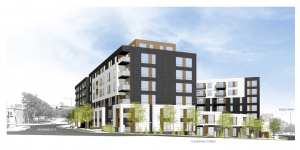 Schafer Richardson, in partnership with developer Peter Brodd, has submitted a proposal to the City of St. Paul HRA to purchase the site at 217 Chestnut Street.  Initial plans anticipate development of approximately 175 units of market rate multifamily housing.  Schafer Richardson looks forward to furthering the design concept and engaging in discussions with community stakeholders should we be granted developer status and a purchase agreement for the site.

As Director of Development Maureen Michalski notes: “ The location is unique in that you have downtown, the commercial district and neighborhoods along West 7th, historic Irvine Park, and the riverfront amenities all within blocks. This site is the confluence of the best of multiple types of amenities and features that will attract residents.  We are very excited to have the potential opportunity to work in the City of St. Paul at such a dynamic location.”